In this guide I will be showing my preferred method for investing SPs, however there is no universally correct way to make builds so feel free to experiment with your own builds.
https://pokemonshowdown.com/damagecalc/
This damage calculator will be key to making your own builds in PBO, as SPs are essentially just manipulating base stats. When using the calculator remember to set all EVs to 0 and to change the pokemon's base stats to the SPs you plan on using.

The PBO Stat calculator is also useful as it shows all the base stats of the pokemon and how you can build them with 300 SPs.
http://pokemonblazeonline.com/forums/vi ... ?f=12&t=47

).
First is Limit Breaking, which is essentially breaking past the 180 limit. You can do this by maxing out a stat on a pre evolution and evolving it, the sps gained will be the difference in SPs between the two evolutions. Keep in mind this means that you can also lose SPs if a pokemon's evolution has lower stats, for example Honchkrow is 10 base speed lower than Murkrow, so it actually loses 10 SPs upon evolution. Here's an example of a pokemon that will gain SPs: 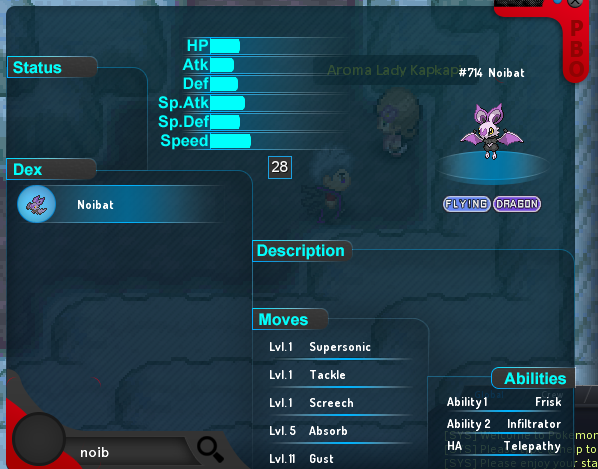 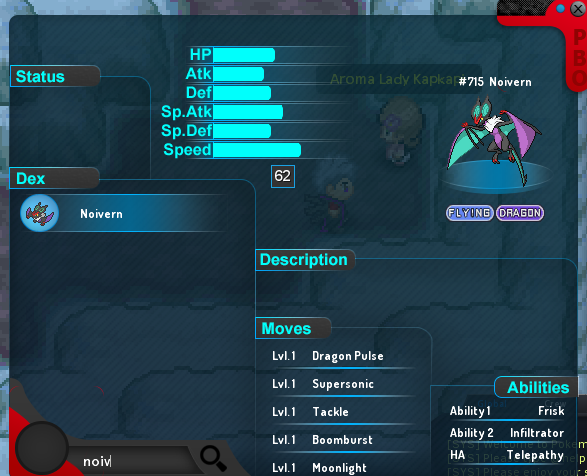 Noivern has 34 more speed than Noibat, so if you give Noibat 180 speed and evolve it, it will have 214 speed! You do not need to be at 180 however, for example if you are at 170 speed, your speed will still increase to 204. Later on we will go over which pokemon will want to do this.

Next lets define 3 types of commonly used builds: these are Fails, Tanks and Semi-offensive/Semi-tank.
Fails, are pokemon that only invest in atk/sp atk and speed.
Tanks are pokemon that have little or no atk or speed and go all out in their bulk, usually having a very high amount in both defenses.
Semi-offensive/Semi-tank are builds that mix between all 5 stats (not counting opposite attacking stats because mixed attackers suck in this game). This type of build is very broad and can lead to many different kinds of spreads, which we will expand further on in the guide.

SPs FOR LEVEL 100
At level 100 you have 300 SPs to work with. The way I invest SPs depends heavily on the role of the pokemon you're using, which can vary depending on what you want to do with it. A general tip is that if you plan on adding equal defenses, it is best to max out HP. For example, in this image with two Abomasnow using the same amount of sps(151) and spreading out their defenses equally, the Abomasnow with the higher hp takes slightly less damage. The exception to this rule may be when hazards are on the field or when you're pokemon is weak to draining moves, as having more hp will give your opponent back more hp. 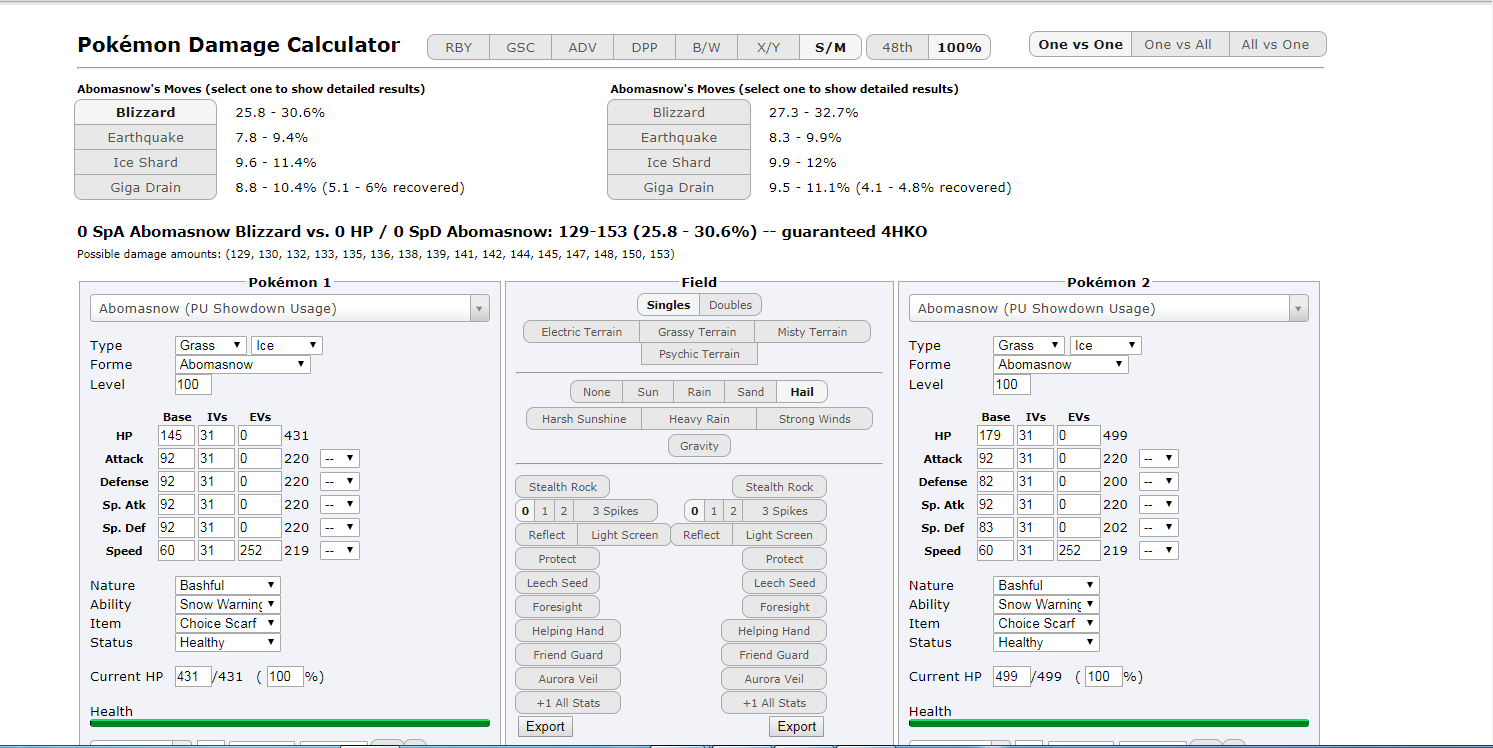 Let's build a full fail, as it will be the easiest to do. Full fails will add no hp or defenses whatsoever and are primarily the pokemon that you will want to break the limit. The role that this pokemon takes is similar to a revenge killer or late game cleaner, it can outspeed nearly all pokemon but also potentially sweep if you have weakened your opponent's team enough. These kinds of pokemon tend to run a focus sash, as they will die to most attacks in the game, but sash allows them to pull off two attacks most of the time and can allow them to deal heavy damage even to tanks. However some will run Life Orb or another boosting item to ensure some KOs. Fails will usually beat semi-fails, as they will have more speed and enough damage to KO them.

Full tanks are a little bit easier to build, but will not always have only defenses and hp. A certain amount of offense is needed sometimes in order to KO the pokemon you are intending to counter, but many full tank pokemon do not need attack. Pokemon that will go full tank are pokemon with recovery and other means of dealing damage that dont involve attacking, such as toxic and leech seed. These pokemon can be susceptible to set up sweepers/wallbreakers, unless they have haze or whirlwind/roar/dragon tail (when those moves work XD). Because these pokemon will be investing in at least 3 stats and not 2, it is harder than fails because you have the option of making your defenses equal, or increasing one stat depending on what you need to counter. For example, a gastrodon is a very good counter to nidoking, who is one of the strongest pokemon in the game. Since most of them are special, you would want to add more special defense, or at least enough to where you can comfortably take hits from it.

Semi-offensive/Semi-tank are the most difficult to build, and heavily depend on the role you intend to take with the pokemon you're building. To know how you will stat these, you must understand common "speed tiers" within pbo, which are unfortunately difficult to determine exact numbers but there are estimates.

5-33: This is the speed tier for walls and generally pokemon in this speed tier will not add speed as they would require too much to actually be bulky. The exceptions to this are bulky set up sweepers, who dont require much atk as they can boost it anyway, but ones with priority such as Scizor will most likely not need to invest speed regardless.

34-80: This speed tier is generally for walls and wallbreakers, walls such as gardevoir, milotic and venusaur are very close to this speed tier and will add a little bit of speed to outspeed each other. Walls will most likely not go past 60 speed, which makes this a good speed to reach for wallbreakers. Wallbreakers can either have max atk/sp atk or a moderate amount of atk/sp atk and a boosting move, and this amount of speed along with a good amount of defenses to comfortably defeat walls and most fails since they don't waste a lot of sps on speed.

82-128: Starting at 82 with a +speed nature, or 91 with a neutral nature, you can outspeed pokemon with 180 speed by doubling your speed. Similarly, 128 speed or 115 with a +speed nature will allow you to outspeed 180 at +1. Pokemon that will have this speed are ones that boost with dragon dance, quiver dance, agility, or weather abilities like chlorophyll and swift swim. Powerful wallbreakers may also try to reach this speed for the purpose of beating these kinds of sweepers before they can set up. Even for pokemon that only need +1 speed can use the speed for +2 pokemon, as they will have so much bulk that it shouldnt be hard to set up more than once, especially for quiver dance or speed boost users. Similarly, weather sweepers such as kingdra may use the speed for +1 pokemon to ensure they outrun fails with broken limits and other pokemon with that speed outside of weather.

Now let's look at common stat spreads for each type of build:
Fails:

25-130 HP (some fails can still reach near max hp even with two stats maxed out)/155-220 ATK/SP ATK/150-220 Speed
Usually full fails will have a very powerful ability or item that allows them to use this spread without focus sash.

5-33 speed: The first tank spread is common for this speed tier, but for sweepers with priorty it may be the second spread.